Our plate prefabrication operations started as early as 1907. The company, Strömsnäs Jernverks AB, occupied some of the premises we now use. Thus, we really do have many years of experience in our walls!

To be able to handle the heavy plates used for the heads and shells of steam boilers and other pressure vessels, the company was an early investor in hydraulic presses and roller bending machines. Before welding took over, parts were initially riveted together.

In 1939, the company acquired new owners, Degerfors Järnverks AB. This was a wholly owned subsidiary of Uddeholm AB.

In 1969, various parts of the company were hived off to form Uddcomb. This moved to Karlskrona in 1972. In the same year, the steel operations in Nyby and Uddeholm were merged into a single company, Nyby/Uddeholm AB. This was bought in 1984 by Avesta AB and prefabrication operations in Avesta and Degerfors were merged to form Nordform AB.

In 1986, because Avesta AB wanted to work solely with stainless steel, it was decided to move such operations to Avesta. This entailed the disposal of Nordform AB. Benny Hammarström and Benny Westergren, two employees in the Degerfors unit, were given the opportunity to set up Deform. They did this formally on the 18th of May 1987. 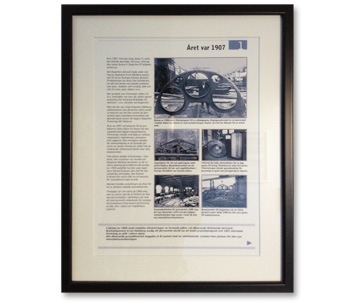